**You might be starting to notice the lack of photography. We’ll get to that**

There was something that was always with us while we were out there in the ocean. I managed to forget about it for the couple of hours that went so well on that sail from San Diego to the Border, but when we crossed and things got closer to dusk, I felt it again. Nothing scary, just a dark fear that we were amongst real danger and it wasn’t going to go away. Add sailing past the sunset and it just got worse. In fact, there wasn’t a lot of time on the boat where I didn’t feel anxious. I didn’t feel strong in our tipsy wooden home, vulnerable is the best way I can describe it. Or how about a simple word like unsafe? 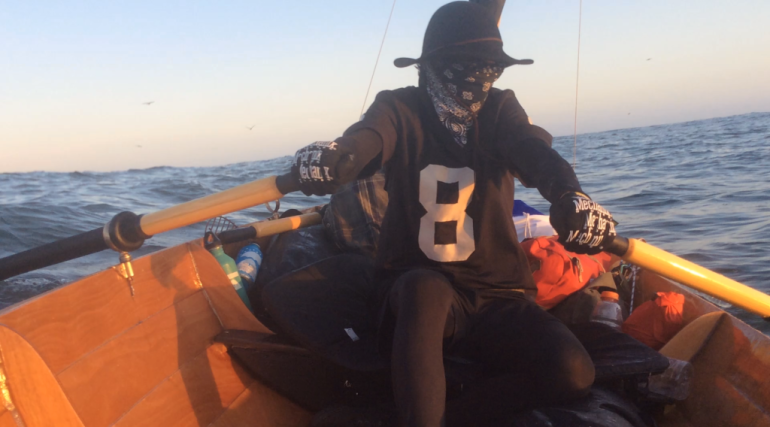 The sun went fully down while Heath took a turn rowing, and once it was pitch black so we got out our headlamps and had some dinner. I had hardly eaten all day and now I was “drinking” cold beef stew out of a can. Not really comfort food after a long day working and getting baked by the sun, but it was what seemed easy at the time. Silver lining? I was going to have no problem shedding some pounds on this trip.

As we rowed it was really quiet other than the sound of the waves pounding the shore. As we sloshed along I started to notice a stream of color leaving the back of the boat. It was truly dark at this point with no moon whatsoever, I slowly realized my eyes weren’t playing tricks on me and I was seeing phosphorescence streaming off the rudder. It was faint, but the glowing greenish specs of light looked like animation. We kept unknowingly rolling through thick kelp beds, so it was my job to reach my hand down and touch the bottom of the rudder so the seaweed would flow past my arm instead of catching on the bottom. We did this for a while, so I just sat there with my face right next to the water half mesmerized by the glow of the tiny organisms and half scared something was going to come out of the darkness and eat my arm.

Somewhere in the middle of the night I was so unbelievably tired that I had what seemed like a stroke of genius for being half asleep. “Why don’t we just put down our daggerboard (keel), anchor ourselves in this seaweed and take a rest.” It felt like such a relief to stop and just float. We were getting a little cold and were pretty damp too, so we tossed around some clothing and made ourselves as comfortable as we could. It may sound really irresponsible, but we didn’t bring much warm clothing, so Heath borrowed my jacket to put over his legs and I felt like a lottery winner when I found an unopened sleeping bag at the top of my bag.

The next few hours are kind of hazy. I tried to keep myself awake and let Heath sleep, but I kept nodding off. Panic would wake me up every so often, but I would inevitably doze off and go through the cycle over and over again. I had a legitimate fear of floating away from the kelp and getting too close to the waves, so when I woke at about 3am and felt the boat moving it freaked me the fuck out. Waking up in the dark in a small boat and not knowing what is going on is a real shocker, I thought I had a heart attack when I realized that a slight wind had pushed us through the seaweed and we were drifting. “WE’RE MOVING!” I barked out. Heath bolted up, I got my bearings and then we settled down when we realized we weren’t in danger.

Well, even though it terrified me, the slight wind that came blowing in the middle of the night was a nice recipe for a sail. It couldn’t make up it’s mind which way it was coming from, but I grabbed the rope for the main sail and the tiller, sat back and managed to get the boat moving at a casual little pace. There is always at least one time on each trip where you get overwhelmed by your surroundings and this was our time. No moon, the trickle of the water moving past the rails as we sailed in the middle of the night in a foreign country. Heath spoke up and said what we both were thinking “this is amazing man.”

“Why don’t I sail and you get some rest. We don’t both need to be up right now.”

I don’t know what time the sun came up, but about an hour before, our fate came rolling into the ocean from the shore and changed everything. I had been snuggled in my sleeping bag sailing in the cold when a warm wind hit me in the face and made me stop and think “Wow, that’s really odd. That’s coming from somewhere else and it’s 20 degrees warmer.” It didn’t take long for that breeze to become gusts and for those gusts to become real wind. Strong wind that kicked up the surface of the ocean into rough slop. I was sailing so nice and slow 20 minutes before and then I’m plowing through small chop, bracing my feet against the side of the boat as the Ojo Negro tilts to the side as I sat soaked by spray coming over the bow. With the boat tilted the rail ran right against the water letting small amounts of ocean in at a time, and through all of this Heath was bouncing around on his side with his head still down until he noticed his legs were wet.

“Holy shit, there’s water up to the seats. Get the pump.”

8 thoughts on “The Floating Restless Night”