Throughout the trip, and now at the end, when people ask us how it was, the answers end up sounding mostly negative, but they’re not really. I don’t think we mean for it to sound quite like it does, but it’s hard to separate yourself from the pain part of the journey when it’s still so fresh in your mind. When we were somewhere in Colorado, Heath was talking on the phone with a friend who asked “So are you guys lovin’ it or what?”. Ummmm no, not exactly. I mean, we love stopping, we love resting, swimming, eating, and piling out in hotel rooms, but the bike riding is just tedious work most of the time. I think my favorite was when Carter at Alien asked if people we’re stoked on us riding by, like were chicks flashing their tits at us? Once again, answer’s gotta be a no on that one. There were no Motley Crue moments on the ride whatsoever.

The last day was a perfect example for me. We had 90 miles to grind out with the hopes of getting in before dark so we could shoot some film and take a few photos (which didn’t happen). The first 45 miles of the day were really torturous for me. I don’t know if I was just worn down or just over it, but I do know that I kept saying to myself “I AM SO FUCKING OVER THIS!!!!”, so it might have been the latter. After squeezing in one last lone meltdown and some lunch, I rode as fast as I could through some of the most heinous terrain I’d ever seen. Go hang out in Newark and Jersey City and you’ll know what I mean. I was beside myself at one point at how dangerous and destroyed the roads were that we were traveling on, but I gained a little solice when I spotted a bike tire trail and knew Heath had waded through the same scum as me to get there.

So why do it right? I don’t really have a great answer for that question, but I think Heath would agree that part of it was just to see if we could do it, to challenge ourselves, to see if we could put up with the suffering, to do something really random and new. Heath said last night at dinner “Have you ever done something for 53 days straight, let alone something you’re not even interested in?” For some people their biggest fear is leading a boring life (including me and a lot of others that I know), so they end up making certain decisions based solely on the fact that they don’t want to miss out. There will always be a part of me that just wants to say yes to anything that sounds crazy, so that’s what I did, a year ago———-> 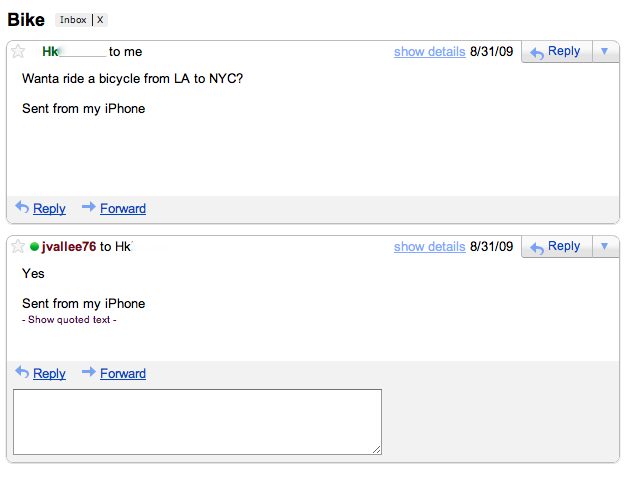 There is no reason this website has to end here. So we’ve decided that if anyone is thinking about planning a “big one”, then we’d love to pass on the website so you can write about it, photograph it, and share it.

Also, if there ends up being anything on those five rolls of super 8 I shot, I’ll edit it and put it up sometime in the future, but it might be a while so check back later.