I’m sure some of you can sense some of the over the top bravado in the build up to the journey south. I think a part of me has to be this way to keep myself from thinking too hard about the reality of the trip, and I think another part of me knows that, like every one of these trips, there will be a time real soon that we will be put right the fuck in our place and all the coolness will pour out. It happened on the second day of the bike trip when I tried to ride up a mountain and it took me all day. It happened on the rafting trip when we ended up perched on a rock in a mad panic on our very first rapid, and it happened before we even started climbing on El Cap when we hiked our gear to the base and felt like throwing up from exhaustion. So hang tight, I promise not to leave anything out.

To get the boat from LA to San Diego we rented a U-haul, slid it right in the back and piled our bags of gear in. John Santos was along for the ride and our good friend Jetski cruised down as well to help us out and to shoot some photos (all in this post). The plan for the day was to put the boat in at Mission Bay where we would be protected for the first mile or so, get our bearings, head out of the channel into the ocean, row and sail south eight or so miles, and then cut left and swing into San Diego Harbor and get a guest slip for the night. Seemed easy enough, 13 miles or so total.

Of course everything takes much longer than you anticipate, but that’s always going to happen. We rigged our sail on the beach, dragged our boat down to the water and readied our selves to jump in and get going. It’s good to note here that I was frothing with nerves, thoughts of things that we should have done (forgot to buy film), and generally concerned with the fact that we had a lot of ground to cover and it was past noon already. With the mast up, but the sail tied around it and out of the way, we pushed off and it immediately felt horrible.

The boat has three rowing stations, so when we were rowing at the same time we would be on the two outside stations. Only problem with that was that when the mast was up the front most station put you with your back right up against the mast and no room to move. Heath turned around to see if he could row forward, very very awkward. He switched to the middle station up against me and that was only slightly better. With him rowing so close, his hands were hitting me in the back and I couldn’t lean back with each stroke, and while all of this is happening we’re drifting into these rocks because our strokes are getting us almost nowhere. We immediately realized two things. One, with the oars in the Grand Canyon raft, there were oar locks that kept the oar from rotating. This meant that you never had to be concerned with the angle of the blade, it was always just right, and you could just pull your ass off and be fine. We did not have oar locks on the new boat. The second thing was that when you were in either the front station or the back station, the boat was too skinny width wise and it was hard to get a good pull with the oars we’d bought. In the middle station it felt the best, but even that one was kind of flawed because without enough leg room we were hitting our knees with our hands. I know that’s a ton of strange details, but the point is that it felt awful to row the boat and I couldn’t see an immediate solution. 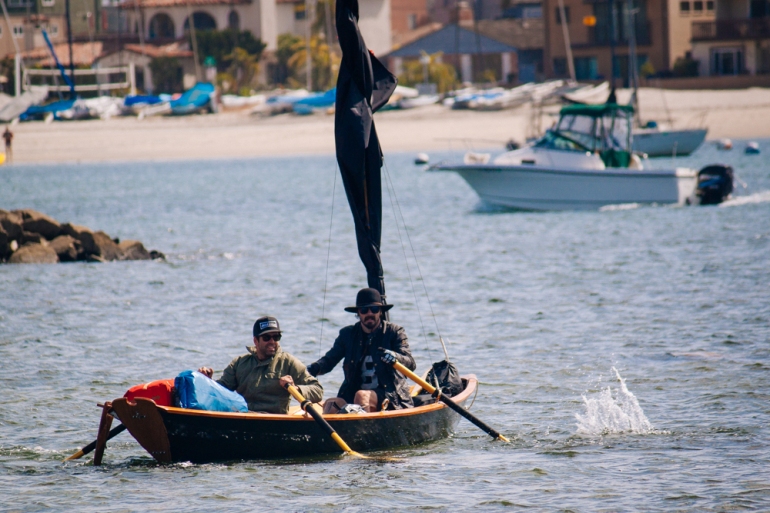 One of the catches to starting that particular day was that we were still in the tail end of a bad Northern storm in Southern California. There were still pretty heavy winds and there was 4-6ft of swell in the water. When we made it out of the little cove we were in and into the channel, it didn’t get any better. The water was much more rough and we didn’t seem to be really moving at all. Heath suggested we let the sail down and I felt zero confidence in going down that road this early in the game. I just pictured me dropping the sail, it filling with a stiff wind, and us capsizing and dumping our gear, all in the first hour.

At this point I’m just spinning with confusion. I’m starting to feel sea sick, I’m covered in sweat from trying to move this boat, and I’m sitting here looking at a boat channel that I can’t even make it out of. How the hell am I going to sail 900 miles if I can’t make it out of a harbor and into the ocean!? I can see the end of the jetties where the open ocean meets the protected water and it looks a little nuts. Huge swells in the water, and the palm trees were gripped with wind. I had a very strong feeling that I did not belong out there. “What the fuck am I doing?”

5 thoughts on “Finally: The Nitty Gritty”