At story time on the last night, Dave told us a big one.  We had seen a rescue helicopter a couple of times fly in below us while we were climbing and it sparked Timmy’s memory, “Dave’s been pulled off the wall before.” (We later found out that the helicopter was picking up a guy who had reached up for a hand hold on the face of Half Dome and the block came loose.  It chopped his rope and he fell to his death.)

Dave told us about a time back in 2004 when a long, unexpected storm rolled in around late October.  He was on a different route and had packed a porta-ledge with a fly, but others hadn’t done the same.  The nose route has natural ledges to sleep on the whole way, so a lot of people don’t bring shelter.  There happened to be a Japanese team that were suffering through the storm day by day around the corner to the west from Dave.  I guess what happened was they couldn’t wait any longer and decided to cut their bags loose and go for the top.  They were later found frozen, hanging in their harnesses, about one pitch from the top.  We actually passed the spot, and when you see it you can’t imagine being stranded so close to finishing.  Hearing the story brings you right back to where you really are, a place that is foreign.  Like Timmy said, “you’re not really safe, until you get to the top.”

Despite the stories, you push the bad thoughts out of your head, and the excitement of finishing does wonders for your ability to push on, even if you’re tired. Three pitches left…two…one. 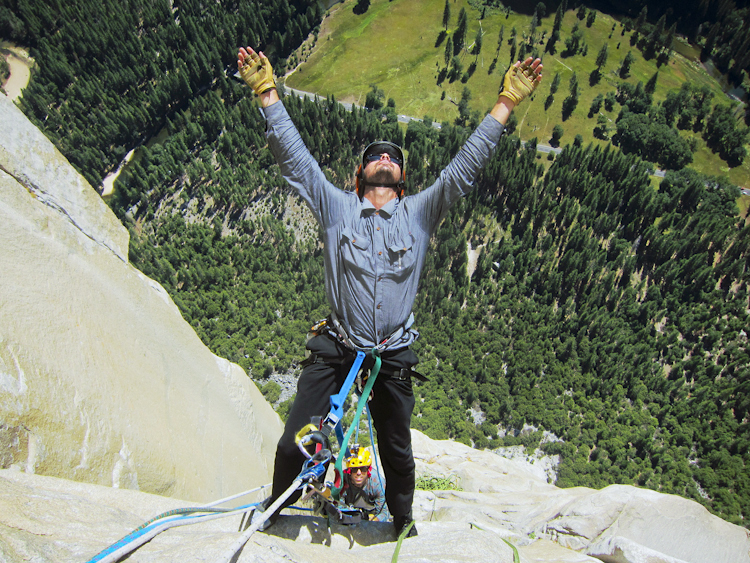 The last pitch is a special gift from the rock to let you know exactly where you are.  The lead climber goes up and around a very steep section, but when he fixes the ropes for the rest of the crew, they go right off the top of a massive overhang.  So, for the first time, we were forced to climb a rope, totally exposed, and twisting in the wind.  You really don’t realize how much you use the rock to stabilize yourself until you don’t have it anymore.  The only word to describe jumaring like this is awkward.  Ok, one more word, brutal.  It was those last 100 ft or so that the Wal Mart pull up bar really paid off.

While you climb closer and closer, Timmy does a good job of reminding you to look down. He loooves to yell below:

6 thoughts on “The last pitch”